I expected myself to have come up with something to say by now about the fact that Tucker graduated from college in June, but so much happened almost immediately following it (a bad concussion for Béla, a week in Woodstock, NY for everybody), that I never got to it.

We are particularly grateful to Tuck’s undergraduate advisor in the Custom-Designed Major Program of the Pennoni Honors College, Kevin Egan. That FERPA waiver wasn’t for nothing, and between the applications to graduate programs and the last term at Drexel, not to mention his Senior Capstone Project some of those classic ASD executive function shortcomings were kicking in for Tuck, and Ben was checking in with his faculty mentors, with some very specific checklists, pretty regularly. As you can see Kevin’s big smile in the photo above, so can you recognize it in silhouetted profile at Tuck’s Capstone presentation. His support is one of the many things we will miss about Drexel’s undergraduate program. We could not be happier that Tucker is staying within the Drexel system; this is a place where he is understood and valued.

Tuck’s graduation events were spread out over two days and he kept things — from his guests, to what graduation-related decor I was allowed to put in our front window, to what he wanted to do after the ceremony (which was: get a shrimp cocktail tray, like one would get for a party, but not go to or have a party, and just eat the shrimp at home) — the way he wanted them. 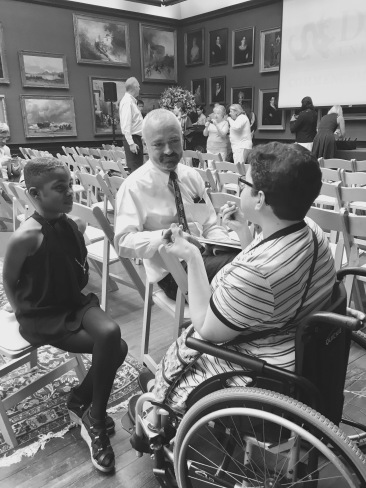 More valuable than the medals or accolades is the fact that in the month since he graduated, Tuck’s had no dark circles under his eyes, and has had literally glowing skin — he is less stressed, and has had more free time, than in the last four years. In Woodstock he was able to spend hours upon hours doing jigsaw and logic puzzles.

He begins in the neurorobotics lab that he will be starting his first rotation in for grad school this week. I will miss having him at home so much. We all will.

We tried to take his ID photos for grad school today. 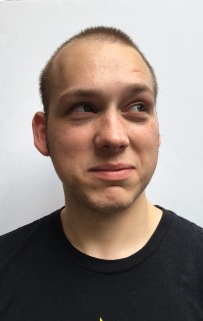 We will try that again tomorrow.