“I think more than any of the other things that have happened, this is the weirdest.”

That is what Tuck said, as the whole family sat surrounded by a pile of my dad’s belongings. Ben had gotten into the house that afternoon, much more smoothly than expected, but still with the need of a locksmith’s services. He said he had to call eight or so Jewish locksmiths before he found one who was working, since it was Yom Kippur. Which, of course, made me wonder, Why were you not just calling non-Jewish locksmiths? 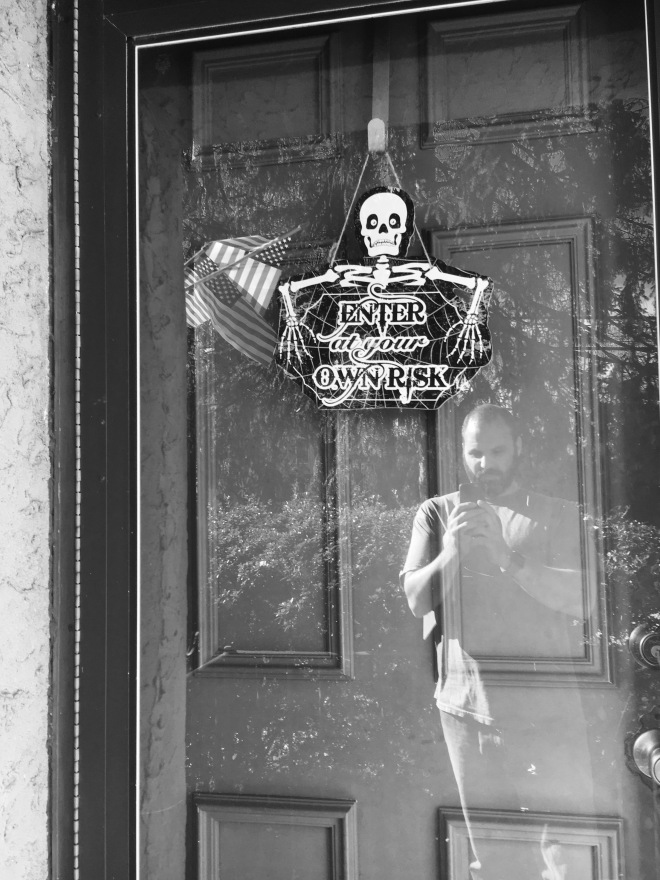 Ben spent a good deal of time with me on the phone as he went from room to room, beginning to assess and take photographic inventory. So much of the house had been refurbished since we had last been there. While there was a time you could have only described my father as a hoarder, by contrast to when we had last seen it, the house was empty. There was some Ensure left in the fridge.

At one point during Ben’s initial tour, he realized someone else had come into the house while he was upstairs. (The locks, after all, had been blown to bits by the locksmith, who had another job to do before he could come back and replace them.) Ben was surprised to have to identify himself to a stranger in the house, who turned out to be a private investigator Ben’s own dad had had checking on the place, encouraging its former resident (she of the weak Halloween decorations) to take her leave.

So suffice it to say, Ben was having an exciting day trip.

I didn’t want too much from that house coming back into our own house. I have been, for years, specifically afraid that upon my father’s death his belongings would make his way into my house and make it smell like his. Long before my father’s death, I worried about this. Now it was the day it was probably going to happen. The days you worry about, and imagine — they come.

Ben had gone in looking for some very specific items. He came home with them, and more.

Locating these items was the basis of a long phone conversation. The kids were home from school because of the holiday, and they stood, staring, listening to my every word, which, even hearing only my side of the conversation, sounded pretty dramatic. “What about the other thing? Did you find it? No. Leave that. What about this thing? Grab it.”

Finally, the children’s unblinking, prurient stares got too be too much for me, and I went upstairs to finish the call. Then we waited for Ben to come home.

Many of the things Ben brought home were were gifts I had given my dad over the course of the years. There were R. Crumb pins, each still in their bag with a Crumb-designed label, purchased at the Junkman’s Daughter’s Brother in Athens, GA, weeks before Claudia was born. There were framed and signed Edward Gorey prints, and a Lynda Barry original drawing, inscribed To Drew from Amber. There was the wooden box decoupaged by actress Grace Zabriskie with stills from the film Wild at Heart.

I wasn’t too anxious to get too close to anything, or to examine it too closely. But nothing smelled like his house.

Ben had also brought home a number of things that he’d just come across during our phone conversation, as he went from room to room. “I just found this… what in the… why would… okay, I’m just going to bring this home for Tucker,” he said a number of times. And so when Tuck got home from class, he found himself the new owner of : an antique microscope. An unusual petrified stick. Numerous carved, wooden boxes. An M.C. Escher pop-up book. Geometric origami kits.

There was also a puzzle cube. Tuck’s Rubik’s Cube is not the Linus’ blanket it was when I met him. And he’s had many other puzzles since then. This cube had sides that were divided not into ninths, but into quadrants.

“See if you can do anything with that,” Ben said.

I wish I’d been recording it when it actually happened the first time, because when the surprise came, my kids really did gasp in delight. It was so unexpected, and part of me hoped, or just pretended, that this was a message of kindness from my father. (This video was simply recorded to show how neat it is.)

Tuck was pretty surprised by how “him” the pile of stuff that had come home was. “It’s like if I was playing Scrabble, and I reached into the bag, pulled out six letters, and it spelled my name,” he said. But that’s the story in a nutshell; I never met anyone more like my dad than Tucker. And Tucker reminds me more of my dad than anyone I’ve ever known.

Tucker took possession of one other item before the end of the night, although not permanently. For most of my life my dad wore a gold ring, which had belonged to his grandfather on his mother’s side. All my life, I was told I’d get the ring — as his oldest — and that I’d pass it on to my son, if I had one. I do. 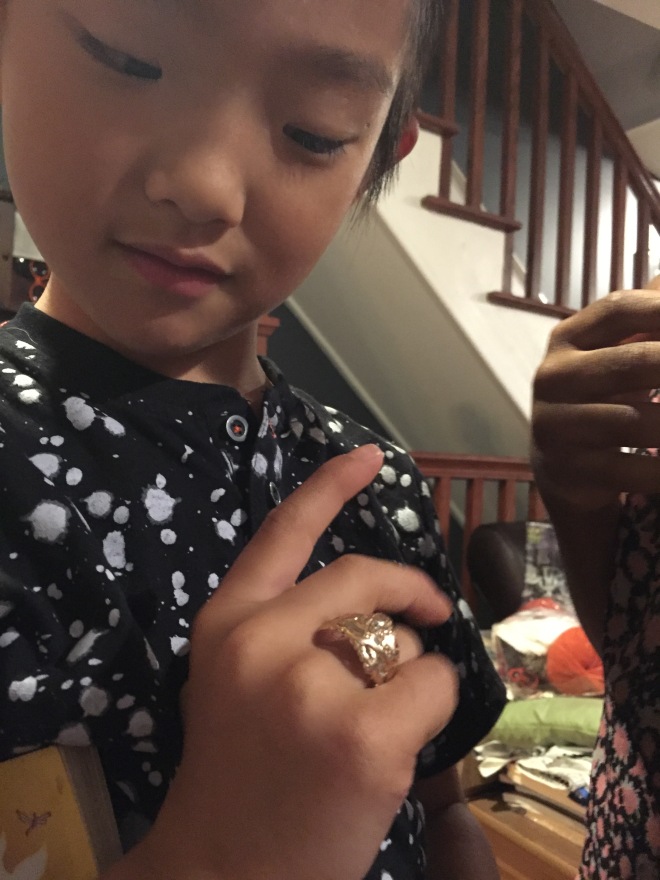 Béla knew the ring was coming. Béla has no illusions about my family and I don’t think he looks at this ring thinking, “Gee, my great-great-grandfather wore this!” As far as “family heirlooms” goes, this is a pretty janky path — “It belonged to the father of the mother of my dad who was crazy mean and who never met you, and you are of course no blood relation to any of these people and probably not at all who they pictured getting this ring.”

Obviously, we never said that. But I did say, “My dad wore that ring my whole life. He told me I would get it for when I had a son, and Daddy and Cappy (Ben’s dad) worked hard to make sure that happened. This ring was meant for my son.”

He seems really happy about that. Tucker will be taking care of it until Béla’s fingers fit it (although we are not sure now where Tucker’s upcoming Drexel class ring will go!)

There was not much else Ben had found that would be of interest to the kids, except a rather nice coffee table book called The Golden Age of DC Comics. They were very pleased with it, and kind of clung to it as the one safe, recognizable thing “for them” that had come out of all of this so far. (When she had heard Béla would at least be seeing his ring, Claudia asked if there weren’t “earrings, or anything” at my father’s house for her.)

I think in part it was relief and in just trying to keep positive that they seemed so excited about the DC comics book, and they were looking at it together and chatting, and before I even knew that it was coming out of my mouth I said, “You guys, I am really sorry.”

They looked very surprised. “Why?” they asked.

I was having a feeling that I had not put into words before, or even recognized. That’s a good thing! I thought. But I was crying.

“I’m sorry I couldn’t give you a good grandfather,” I said.

I thought about other kids who had great relationships with wonderful grandparents, and was sad that Béla and Claudia were getting all happy about this stupid book. It was almost worse than having nothing for them at all.

No reality exists in which my kids experiencing their lifetimes so far — the last eight years — with my dad as part of them, would have been better than all the discomfort and weirdness of now. This is still how we come out on top.

I’d had enough of looking at my dad’s things and retreated to my cone of silence on the third floor. But not for long. Béla came up shortly after, saying, “I have some questions to ask you.”

He wanted to see pictures of my father. He was surprised to see some with Ben in them. He was very surprised, and kind of delighted, to see one taken in my dad’s house, where on the wall was the Sam Maitin print that Ben had just brought home to our house.

He asked if I thought my father looked different when he died from the most recent photos I had of him. I said I imagined he looked very different, he was a good bit older and very sick. And then, this being clinical Béla, there were a lot of questions about dementia, and how you get it, and what happens. “It’s just like everything starts unplugging,” he reasoned. I agreed. Or, I said, it was like the way Béla had recently described for me what happens to the marshmallows in Monster Cereals when they hit your tongue — they are there, and then suddenly, they are just gone.

Ben had brought home a small hardwood rocker with the other things that first night, and I wasn’t thrilled. I had kind of said don’t, and apparently he had it in the car anyway. It immediately become a favorite spot in the living room. Over the weekend, Claudia came running down the stairs, clearly anticipating the treat of sitting there, with a pillow, Hoogah, a blanket, and her iPad.

“Look at you, all snuggled up in your grandfather’s rocking chair,” I said. I regretted it the second it came out.

“He’s not my grandfather,” she said sharply.

He’s just “my father”. That’s how they’ll know him. It has begun to take on an ominous sound and so I tried to switch it up this week and say something about Daddy going out to “Drew’s house” to do stuff with the realtor. Béla screwed up his face. “Who’s house?” he asked.